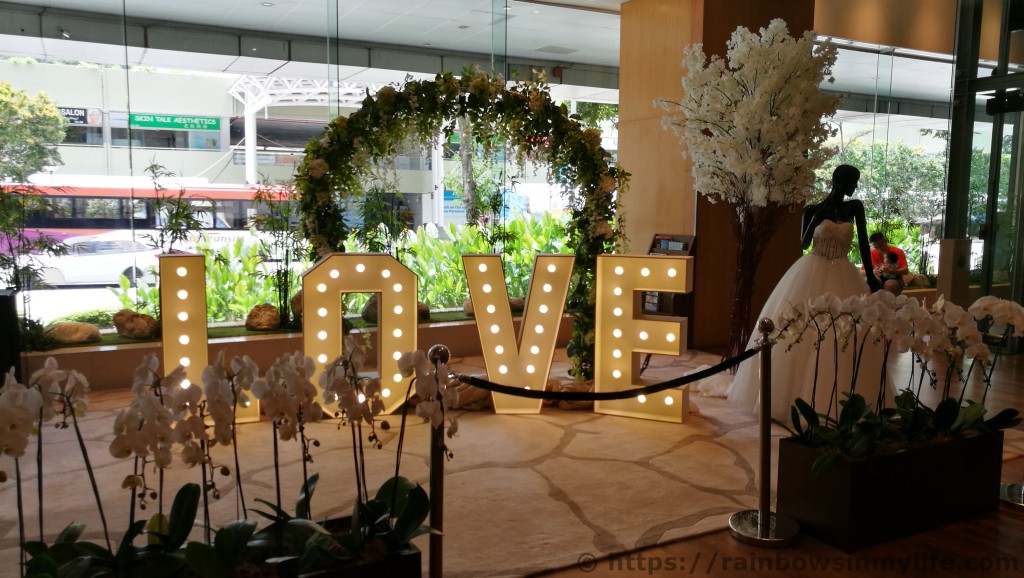 In my previous post, I talked about how I thought Qian Xi would be my ideal wedding banquet venue and how I was eventually disappointed. After deciding that we do not want to take up any of Qian Xi’s packages, Sunshine and I went to search for more venues which meet our criteria: accessible (near to MRT station), value-for-money, good food, ballrooms which we like and so on. Some of those we shortlisted were as follows:

I saw Amara’s advert for their wedding show online and I signed Sunshine and myself for it despite us not meeting the minimum number of tables required. This was because I wanted to ask if they could still accept 20 tables (Sunshine and I re-estimated and realised that we may be able to hit 20 tables instead of the 14 we told Qian Xi) and if they could not, we could still look at the other deals offered by the vendors who would be participating in the wedding show as well.

Not wanting to waste each other’s time, the first thing we asked the coordinator when we sat down was whether they accept 20 tables instead of 25 tables. After a quick check, she offered us a package for 20 tables which did not really interest us. Other than that, I think the hotel scored points for their accessibility, food, service, ballroom and rooms!

Accessibility – Amara Hotel is located within a 5 min walk from Tanjong Pagar MRT Station. Being in a central location also means that it would be very accessible for our guests to attend our wedding.

Food – Lunch was offered by the hotel during the show and we were given wok-fried prawns which were big and succulent, braised abalone, baked black cod, hashima, churros with their special red bean sauce (which sounded weird but was very yummy), among others. In short, food was deliciously sumptuous! The banquet manager and waitress serving us were friendly and prompt in their service too (of course, this might be different during banquet, where it can be busier with more guests).

Ballroom & Theme – I also liked their ballrooms as they had “stars” on their ceiling! The colours of the stars would change at certain intervals, lending the room a romantic feeling. The ballroom was huge and pillar-less too! Couples who wish to hold their solemnisation there could choose to hold it in one of their function rooms (complimentary with a floral centrepiece) or in their outdoor pavilion complete with decorations (at an additional charge). Very pretty though! Similarly, some of their themes showcased in their ballroom were quite pretty too. However, I was not particularly attracted to any of them.

Bridal Suite – We were also showed to their bridal suite which was huge with an adjoined living area. Complimentary wedding couple bear (damn cute!) and refreshments would also be provided on the banquet day.

Accessibility – Sunshine and I shortlisted ParkRoyal Kitchener because of its price (from $808++/table). It was just located within a few minutes’ walk from Farrer Park MRT Station!

Ballroom & Theme – As there is only one ballroom in ParkRoyal Kitchener, couples can be assured that they would be the only ones holding their banquet there on that very afternoon/night. Guests would only be directed to one venue and would not be confused. (The sales coordinator, Mr Tan, shared with us that Fullerton/Grand Hyatt (cannot really remember which hotel actually) could actually hold up to seven wedding banquets on the same day! Most of the hotels can actually hold at least two banquets simultaneously. ParkRoyal Kitchener is hence, exclusive in this aspect.

However, though we already knew beforehand that there are pillars in their ballroom, we did not expect the ballroom to be full of them and that they would be so huge! The sales coordinator was quick and very cool in pointing them out to us and showed us how the view would be like if we were seated in certain corners of the ballroom. ParkRoyal Kitchener had cleverly tried to turn this disadvantage into their advantage by installing lights with changeable colours on the pillars. Mr Tan shared that the colours of the lights could be switched according to the couple’s preferences and/or theme. Although there would be live-screening shown for those who would be blocked, Sunshine said he did not have a good experience being blocked when he attended someone else’s wedding and he would prefer not to sign with them. Given that we did not have that many tables, the perks extended to us were also limited. We understand that as they can only “earn” from one banquet per session (afternoon and night), they would want to maximise their profits by having couples hold as many tables as they could.

The theme showcased here seemed pretty attractive to me too. I was thinking we could have this blue theme and I would wear a blue evening gown as per Sunshine’s wish! (His favourite colour is blue and he is biased towards me wearing a blue evening gown for our wedding. I am the exact opposite as I am a “pink girl”, who loves everything girly! Lol!). However, I do not really like the table cloth used for their VIP table as it reminded me of curtains. Additionally, as much as I think the bird cages were classy and elegant, I could not help but feel that bird cages in this case gave me an impression that marriage cages a couple’s individual freedom. Erm… not to my liking la… Haha. However, as there would be other themes to choose from, this did not worry me that much.